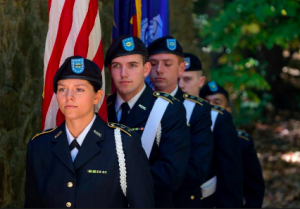 Not all students registered for Military Science classes are referred to as Cadets. A Cadet is a trainee that is enrolled in a military officer producing program. The ROTC program has two categories of Cadets enrolled in the program: Enrolled Cadets and Contracted Cadets.

Participant (Non-Cadet) – Registered for the MS class through the university and responsible for attending all classroom activities. These students may be taking the class as an elective or to learn more about the program before deciding to enroll.

Enrolled Cadet – Has completed all documents listed in the ROTC Enrollment Packet (student who has been determined eligible by the Professor of Military Science for enrollment in the SROTC program and has signed the CC Form 139-R). These students are eligible to attend all extra curricular activities associated with ROTC, such as: physical fitness training, leadership labs, and Field Training Exercises (FTX) which include rifle ranges, land navigation training, obstacle courses, and leader reaction courses.

Contracted Cadets – Student who has completed all documents listed in the Contracting Packet and has been identified as possessing the character and attributes necessary of an officer candidate. These individuals have signed the Army enlistment contract (DD 4/1, DD 4/2) and ROTC contract (DA 597 or DA 597-3 ) and are completing requirements to be appointed an Army Officer upon graduating with an academic degree (bachelor’s, master’s, Ph.D.).

Cadets have the same lifestyles and academic schedules as any other college students. They join fraternities and sororities. They participate in varsity team and individual sports. They take part in community service projects. But as a Cadet progresses through the ROTC program, his or her responsibility to the program increases accordingly.
MSIs, first year Military Science students, typically college freshmen, begin by learning basic Army customs and courtesies, Army terminology, and Army Drill and Ceremony.
MSII Cadets take on the role of Team Leaders, responsible for leading small groups of 2-3 freshmen and sophomores. They will pass down relevant information, such as lab details or physical training (PT) plans while assisting the MSIIIs in conducting training.
MSIIIs are the core of the program because they hold the critical leadership positions from Company Commander to Squad Leader. They are in charge of anywhere from a squad of 9-10 underclassmen up to an entire company of 50-60 cadets. With the help of the other juniors, they facilitate training such as PT, lab, and other important battalion events. This year of ROTC is the most vital for Cadets, as they train rigorously and have their leadership comprehensively evaluated in preparation for the Accessions process.
Senior Cadets, MSIVs, in conjunction with the Cadre provide oversight for the entire battalion through cadet staff positions, planning training events and monitoring the leadership of the juniors. These Cadets are given a large amount of freedom in managing the Tar Heel Battalion, as they prepare to assume their vital roles as Army leaders upon graduation and commissioning.
For a more detailed breakdown of day-to-day Cadet activities, click here.